Located in northern Ontario, near the Town of Cochrane, Detour Lake has more than 15 million ounces of gold in reserves and an expected annual production of over 650,000 ounces. Detour Gold Corporation, a Canadian gold exploration and development company, is the developer. Detour Lake is on track to becoming Canada’s largest operating gold mine. 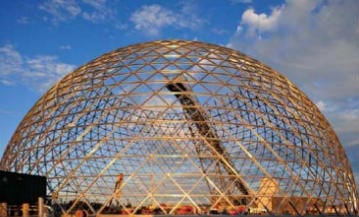 Constructing a cover structure for their operation that also enabled them to house a conveyor needed to be done in a safe, environmentally responsible and cost-effective manner. Detour Gold’s requests were threefold: ensure worker safety by minimizing the amount of dust created by the stockpile; minimize the release of dust into the environment; manage the amount of material awaiting transport to the mine’s ore processing facility.

Greatario Engineered Storage Systems responded to a bid request by Detour Gold for their stockpile containment solution. BBA’s structural engineers, the Detour Gold engineering team, AMEC, Greatario and CST Covers met to discuss specifications of the bid. Greatario, CST Covers Channel Partner in Canada was able to offer a customized ‘turnkey’ containment solution for the mine. Following review of the proposal and site visits to the other CST bulk storage domes, the contract was awarded to Greatario. Greatario assumed the role of general contractor and installer of the dome. CST Covers provided engineering services, and manufactured and supplied the dome.

A typical design/build would be ‘tower build technology’, which means the dome is built from the inside-out. The inner frames and poles are constructed and raised by a pole crane. However, as the existing conveyor at Detour Gold eliminated the opportunity to use this technology, an outside-in cover construction method was used.

In total, 3,363 beams were constructed into aluminum gussets to form the structure. Greatario’s team built the dome as deliveries from CST Covers arrived on site. As the prefabricated beams slide easily into aluminum gussets and hold securely, the assembly process requires no welding of the dome itself, which was a huge advantage. This precise assembly process allowed the construction team to assemble the dome under various weather conditions. The finished frame was then clad with over 2,240 aluminum sheets.

The finished stockpile dome is 97.5m in diameter and 52m high, which is the largest dome that Greatario has built and the largest aluminum geodesic dome in Canada. It is designed to withstand snow loads and wind speeds typical for the area. Material is transported from the dome to the mine’s ore processing plant via an existing underground tunnel.