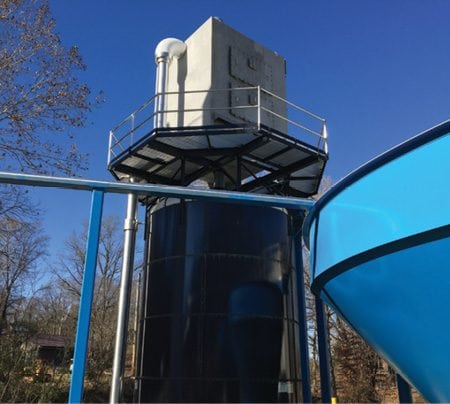 There’s iron in your well water, you’re sitting on a fault line and your soil is silty. Three strikes and you’re out, right? Not if you’re the Anna-Jonesboro Water Commission, which fearlessly prevailed against the challenges of nature with help from its allies: Aquastore®, CST and J.T. Blankinship Engineering.

AJWC is a wholesale water supplier to several municipalities and rural water districts in southern Illinois. How it overcame everything nature threw its way is an epic tale of partnership and persistence.

Element 1: Iron Contamination
“The Illinois EPA put us under review due to restraints we had on aeration capacity, which stems from the high iron content in our water source,” says Casey Johnson, Superintendent of the Anna-Jonesboro Water Commission. “At 24 parts per million it’s the highest concentration in the region.”

Even though AJWC has filtration capacity, the EPA advised that the high iron levels put stress on its aeration capacity, which could hamper supply. For example, not being able to meet increased demand in the event a neighboring district has a failure or if a new manufacturing facility were to locate in the area.

“The plant had been de-rated to about 1.4 million gallons a day from its original capacity of 2 million,” says Ted Beggs, President of J.T. Blankinship Engineering. “So we worked with Aquastore to develop a system that would improve the aeration of the incoming water and increase filtration capacity.”

Beggs and his firm have worked for years with Cady Aquastore, the authorized CST dealer in DeKalb, Illinois. They have extensive experience with aeration systems, having designed and installed about two dozen for water districts over the last 25 years, according to Dave Hemauer, Cady Aquastore project manager.

“Our aeration system is a big value-added feature because it’s fully integrated with the storage tank and complements the treatment process,” says Hemauer. “Forced aeration is superior to gravity tray systems because the forced air speeds up oxidation, while gravity systems rely on the water percolating over trays which require frequent maintenance and backwashing.”

Armed with their expertise and intimate knowledge of AJWC’s requirements, the intrepid crew from J.T. Blankinship and Cady Aquastore built an aeration system to attach to the top of a new Aquastore tank. The system features two powerful fans that force air on the water and promote rapid oxidization. The iron settles at the bottom of the tank and the oxidized water is pumped into a clarifier.

“It has greatly improved our overall treatment capability,” says Casey Johnson, Superintendent of Anna-Jonesboro Water Commission. “Using air pressure to force water to oxidize makes it easier to treat. If you have iron or manganese underground, it’s definitely worth the investment.”

Johnson continues: “We’ve gone from between .30 and .40 MG/L iron content when the water reaches the clarifier to almost zero, so I’d say we’ve tripled the amount of oxidation.”

Elements 2 & 3: Shake and Soil
AJWC’s treatment facility is located in the New Madrid seismic zone and sits on weak soils, so Cady Aquastore engaged the services of a structural engineer that specializes in designing platforms for problematic foundations. Together, they evaluated a range of possible earthquake-and-soil scenarios. One involves the outlet pipe from the aerator to the tank becoming obstructed or compromised, causing the aerator to fill with water and become top-heavy.

“When you face these risks you have to calculate the conditions under which a structure could fail and design against it,” says Hemauer. “Our goal was to get the foundation and tank to perform as a single unit and withstand the stress of shaking and shifting soil.”

The Aquastore tank is engineered for durability and construction is simpler than that of welded or concrete tanks. The roof is assembled first and then lifted with a jacking system so the individual steel panels can be bolted underneath. Crews work at ground level and require only a few feet of space around the foundation. An Aquastore goes up in about a third of the time of a welded tank and if an owner anticipates needing increased capacity, the entire tank can be designed to add panel courses for future installation at the bottom of the tank shell.

It also stands up to the harsh Midwest weather. The glass coating applied in the factory makes an Aquastore resistant to extreme cold and heat—more so than welded steel tanks. Its seamless surface prevents cracking which can attract rust, and the absence of corrosion or leakage greatly mitigates the chance of hazardous runoff or leaching. There’s no need to repaint and maintenance costs are lower than other tank types.

Johnson can testify to Aquastore’s reliability and quality. He has a 1.2 million gallon ground storage tank manufactured by CST and installed in 1994 and he says he’s never had a single issue or problem with it. And if he should ever has an issue?

“If there should be a problem they’re easy to reach and responsive,” says Johnson. “The less we have to worry about storage or aeration the easier it is to do our job.”