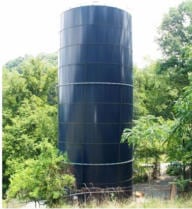 Take a drive down I-65 south of Nashville and about the time the strains of country music give way to a chorus of songbirds and crickets you’ll know you’ve crossed the line into Marshall County, Tennessee. Towns like Chapel Hill, Cornersville, Petersburg and county seat Lewisburg dot the map, serving up the charm and peaceful existence of rural America just an hour from Nashville’s bustling urban center.

Marshall County is named for Supreme Court Justice John Marshall, formed in 1836 when parts of four counties were joined together. Its residents display a reverence for history—as evident in the antebellum home of Confederate Gen. Nathan Bedford Forrest, the 1913 Dixie Theater, the county courthouse built in 1929 and the Ladies Rest Room, once a quiet haven in the county seat of Lewisburg where women from rural areas could enjoy rest and relaxation.

This is a place where “built to last” means something. And while historic landmarks draw widespread appreciation and praise, other structures are just as enduring and as important. Like the massive tanks that help transfer the county’s water supply from the source to the tap. The Aquastore tank is the unsung hero of Marshall County because it performs an essential service day-in, day-out, and year after year while asking very little in return.

The Marshall County Board of Public Utilities chose Aquastore for the first time in 1981 and never regretted the decision. In fact, they came back for more. When it comes to servicing the county’s 31,000 residents, the utility puts its trust in three Aquastore tanks that carry 555,619 gallons of capacity. The tanks are 36, 16 and 4 years old and you’d have a hard time telling the oldest from the newest.

Take a closer look at Marshall County’s tanks and you’ll see that a tank isn’t just a tank. There’s a big difference.

“We get a lot of humidity and changing weather which can be rough on tanks,” says Tommy Whaley, Superintendent of the Marshall County Board of Public Utilities. “One of our tanks sits in the woods and the mildew just sloughs off of it, unlike a steel tank.”

Whaley and his crew know the Aquastore tank is built for the long haul and very little maintenance is required to keep it in tip-top shape. 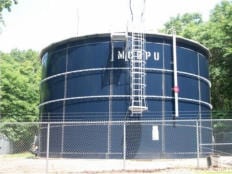 “I’ve been in the water system service for a while and have seen these tanks require virtually no maintenance compared to painted steel tanks,” he says. “You have to do a lead abatement on those old steel tanks which means sandblasting all the way down to the steel and applying several coats of an epoxy based paint.”

“Today’s paint fails a lot easier than the glass coating, which maintains its appearance and luster,” he says. “Even our oldest tank still looks like new.”

But there’s more to the story than appearance and maintenance. Whaley prefers the Aquastore because it’s easier to construct than concrete tanks or bolted steel tanks. When the county launched an ambitious plan a few years ago to expand water service to more rural areas the decision to go with Aquastore was a no-brainer.

County workers installed 68 miles of new lines, upgraded existing lines and a pumping station and called in the experts from Aquastore to build a new 300,000 gallon elevated storage tank on Highway 99 in the Chapel Woods subdivision, which replaced a 110,000 gallon ground storage tank from 1986.

“We kind of hated to see the old tank go because it was in great shape; we just needed more capacity,” Whaley says.

Indeed, the county expanded its storage by 177,000 gallons when it put up the new tank in 2013, measuring 42 feet high and 28 feet in diameter. The new Chapel Woods tank is a few feet taller and wider than the county’s next largest tank, built in 2001.

Don’t be fooled by its size, however. The new, larger tank was erected with relative ease thanks to the superior construction methods of the Aquastore. The Aquastore’s aluminum geodesic dome is lifted off the ground by a jacking system so the panels can be installed underneath. All in all, there are far fewer headaches and less labor than with steel or concrete tanks.

“I’m always amazed at the minimal effort it takes to build a tank,” says Whaley. “Generally you have all kinds of hazards way above the ground but I don’t recall seeing anyone climb the Aquastore tank.”

And if anything goes wrong Whaley knows Southeastern Tank is just a phone call away.

“It’s pretty rare, but we had a seal leak on one of the tanks and Southeastern repaired it for no charge even though it was beyond warranty,” says Whaley. “They really stand behind their product.” 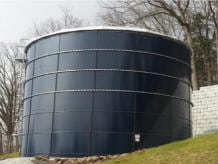 “It’s nice to hear Tommy say that because we always try to look at the big picture,” says Dustin Dowdy, Director of Sales at Southeastern Tank. “We know a leak or malfunction could spell bigger problems down the road for the customer so it’s in everyone’s best interest to jump on the problem.”

Marshall County water has 3,600 connections and Whaley knows he has 3,600 opportunities to delight customers every day, or 3,600 opportunities for failure. But the only number he’s really concerned about is 1: his #1 choice for potable water storage is Aquastore. “Aquastore is the standard for comparison, and there really is no comparison.”