Built in 1927 and upgraded in 1955, the Linden Reservoir had served well but was requiring more caretaking than in the past. John Farley, interim principal engineer at the Riverside (Calif.) Public Utilities Department compared the 61-million-L (16-million-gal) reservoir to an “elderly gentleman.” While it was serviceable and 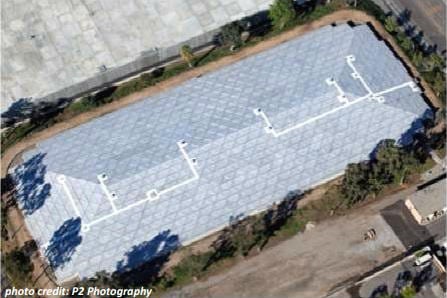 trustworthy, he explained, its roof needed a little more selfsufficiency, especially if it were to survive a major earthquake.

As one of two major waterstorage reservoirs forming the hub of Riverside’s water distribution system, the Linden Reservoir capacity was increased from 45,420 m3 (12 million gal) to 60,560 m3 (16 million gal) in 1955. At the time, a steel roof fashioned from corrugated metal cladding supported by concrete columns and a steel frame was added. Throughout the years, the roof has suffered from significant corrosion and other maintenance challenges.

More recently in 1984, the reservoir underwent a major structural overhaul of its concrete lining, but the public utilities department had grown concerned about the age and condition of the reservoir’s roof; particularly, the roof’s ability to withstand a major seismic event. “On the whole, the old roof had performed well, but we started having more and more maintenance challenges, particularly with the cladding pulling away and extensive corrosion of the steel frame,” Farley said. “We had to continually inspect the roof and repair breaches to prevent contamination and keep foreign objects out.” Ongoing maintenance costs for the roof became excessive. So the public utilities department explored replacement options and hired engineering firm URS Corp. (San Francisco) to evaluate options based on four primary requirements.

The roof needed to be long lasting, durable, and secure to keep out debris and other unwanted objects.

“Since the Linden Reservoir is an old structure, we had to make sure alterations wouldn’t damage the existing reservoir floor,” said Miko Aivazian, the URS project manager. “We’ve seen enough of these situations over the years and have sufficient expertise and data on which to base our recommendations.”

CST’s aluminum covers are designed to conform to any shape of basin or underground storage tank, a versatility that makes them seismically resilient, which is an important quality given Riverside’s proximity to the San Andreas, San Jacinto, and Elsinore faults.

“From an engineering standpoint, one of the advantages of the CST aluminum roof is its lightweight construction,” Aivazian said. “In the event of an earthquake, the roof must be able to expand and move independently from the rest of the structure. An aluminum roof introduces smaller seismic loads into the existing structure and walls.”

The roof installation included a complex but critical support system of concrete pedestals and four seismic walls along the perimeter.

“The roof is anchored to a wall, which runs around the perimeter of the reservoir. We wanted to isolate seismic forces at four distinct locations around the reservoir so the roof supports wouldn’t have to absorb any seismic load. To achieve this, we had four [6-m] 20-ft sections of the perimeter wall removed and replaced those sections with a new anchoring system to transfer roof diaphragm seismic forces into the walls,” explained Matt Huckaby, URS project engineer.

The roof’s custom design and modular construction led to an efficient installation. Pieces were shipped, labeled, and assembled at the job site. Lighter weight materials equated to less manpower and machinery needed to lift the pieces into place. Crews transformed the roof from an aging and corroded steel structure to a sleek, low-profile aluminum structure in just 4 months.

“The new aluminum roof along with the structural modifications to the reservoir will extend the life of the structure over 50 years,” said John Delaney, Vice President of Sales at the CST Covers.

The new roof cost little to install and will have easy long-term maintenance. Unlike other building materials, aluminum isn’t susceptible to damage from moisture, and unlike steel, it doesn’t rust and doesn’t have to be painted. The aluminum roof also is recyclable after its useful life. The low profile also enhanced the reservoir’s aesthetic appeal, Farley said.

“Driving by, you can’t really tell it’s a reservoir,” Farley said. “What you see is basically a landscaped embankment rising up from street level, and the new roof is essentially disguised in the background.”

“I credit the success of this project to the great teamwork between Riverside, the URS engineering team, and the contractor and subcontractors,” Farley added.