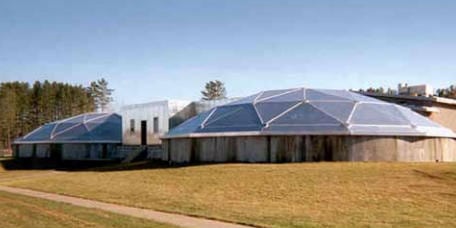 In addition, CST Covers also built an intermediate structure between the two clarifiers which houses blowers, gauges and other equipment for the clarifiers. Since workers are routinely under the domes for inspection, each is equipped with a skylight to provide natural light for those workers. And, to withstand those harsh winter snowfalls, the domes are engineered to support snow loads of 60 psf.

CST Covers has long been recognized in the water and wastewater treatment industries for providing superior basin covers. CST cover systems are inherently lightweight, but extremely strong and able to withstand heavy wind and snow loads. The all-aluminum construction is virtually maintenance-free, and the non-corrosive qualities of

CST Covers’ years of experience building aluminum structures for the water and wastewater industries has resulted in an integrated structural frame and roof panel system that can be manufactured and erected in much less time than required for alternative cover systems.

CST Covers has been building aluminum domes and other structures for more than 50 years and has more than 16,000 installations throughout the world in industries as varied as water and wastewater treatment, petroleum and bulk storage, and scientific research. CST Covers dome and roof systems for architectural applications are in place as sports arenas, cruise terminals, planetariums, churches, and more.