With a growing population, Manchester, New Hampshire also had a growing wastewater problem. Camp Dresser & McKee engineering firm provided a comprehensive approach to odor control at the Manchester water pollution control facility, reviewing the complete system in order to propose solutions to the problem. The source of odors came from numerous parts in the wastewater treatment process. 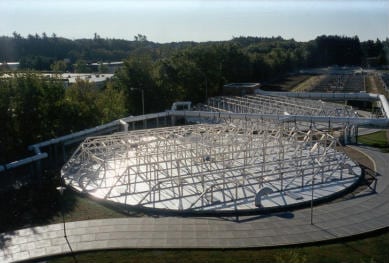 These included odors from:

As a short-term solution, the engineers were able to suggest operational changes. These included the increase in fuel and oxygen in the multiple hearth furnaces, reducing storage times, increasing make-up water to gravity thickeners, and other alternative practices. As an intermediate solution, the engineers recommended the construction of stand-alone septage receiving facility to receive, screen, store and meter septage into plant effluent. Odor control will be provided by the containment of septage in covered storage. The long-term improvements required the development of a new influent pumping station that would sequester highly odorous air and provide activated carbon control and later biofilters before allowing ventilation to the atmosphere.

Additional long-term improvements included changes to the primary facilities by the installation of aluminum primary tank covers for storage containers. Because the biological processes require clear, uninterrupted spans, the engineers designed truss supported aluminum covers that were supported from the exterior walls. These covers had to meet a 60 psf snow load, 30psf live load, pressurization of 2 in w.g. vacuum and 80 mph wind load with a deflection limit of L/240.

The aluminum covers and truss supported system were designed to expand and contract. A camber was designed into the flat cover to allow for drainage of rain and snow. The lightweight aluminum trusses were assembled from manufactured components on an adjacent area. Fully assembled trusses were raised in place by cranes and placed on the walls of the storage tanks. Aluminum plates were installed along with access hatches for observation of the treatment process. A large system of ductwork connected the treatment storage tanks. These were attached to the aluminum covers. Make-up air vents were also incorporated into the cover system. Before becoming operational, all air header piping was pressure tested. The covers were also tested for air pressure. Air filtration of the covers tested at 0.02cfm per square foot meeting the requirement for air tightness. Other testing, balancing and sampling were completed before the system was operational.

Construction began in December of 1997 and the system was operational by August of 1998. The contract was met within budget with a 2 percent increase in change orders. This large system includes one of the largest biofilters in New Hampshire providing a sustainable solution to waste management.